I couldn’t believe that my journey was nearing its end. That night in O’ Pedrouzo as I was preparing my stuff, there was an air of anticipation and excitement for everyone.  Like all pilgrims knew that no matter what, come morning, our journey was coming to a close. I felt a mixture of happiness and sadness.

The albergue chosen by Robi was a quaint one, it had two floors and was spacious. Being one of the early occupants, he was able to secure a cool spot. The room was big, probably around a hundred bunks, so the corner spot, he reserved at the far end of the room offered a bit of privacy. The ceiling was slanted in our area, reminiscent of a cozy attic. 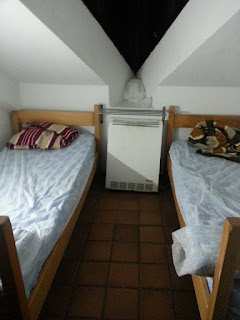 Robi developed a shin splint hence walked only 2 kilometers from Santa Irene to O’ Pedrouzo. I considered it a blessing in disguise since it gave me the chance to finally catch up with him on Day 12. And so for the last leg of the Camino Day 13, Robi and I had the chance of walking together again.

We stepped unto the street of O’ Pedrouzo at 6:30 am, the chill of a foggy dawn greeting us.  We estimated that at a rate of 4 kilometers per hour we would be reaching Santiago before noon. We planned to catch the midday mass at the cathedral specifically offered to the pilgrims. 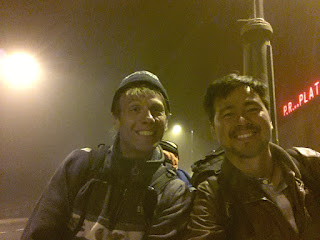 If not for the streetlights, we would have groped our way.  I realized how dark it really was when our path turned left into the woods. We turned on our flashlights, its brightness only enough to shine a few meters of our path due to the fog. I wouldn’t dare walk into the woods if I were alone in that darkness. We walked rather slowly because of Robi’s shin splint. A lone pilgrim overtook us. I admired his courage to venture alone in the darkness. It would be easy to get lost if one missed a turn. After a few minutes we came upon a fork. We shone the flashlights several times before finally seeing a small arrow pointing to the left.

We walked on, excitement building up as were on the last day. By the time the sun rose from the horizon it was still quite misty. I told Robi to go ahead as I took my time taking pictures. A photo of a spider’s cobweb here, a shot of a pair of boots there. 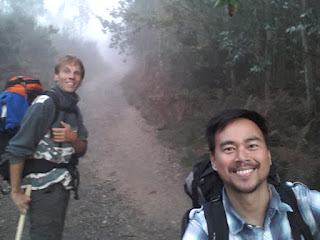 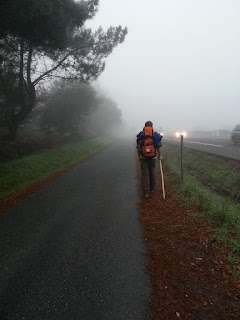 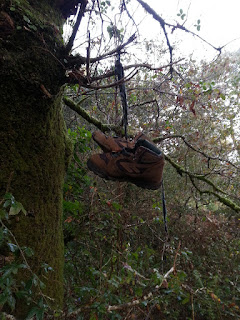 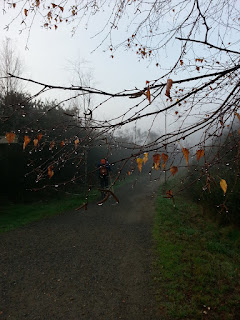 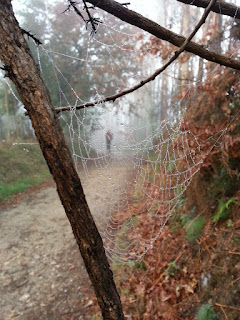 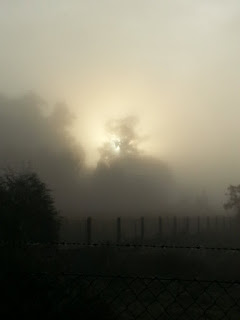 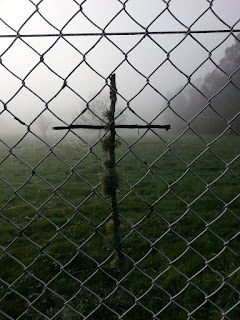 Robi had a bit of difficulty walking but I didn’t mind our pace. I was offering him a dose of ibuprofen but he had qualms about taking medicine.

The path led us to a hillside with a view- Monte De Gozo. It was a shame it was foggy. Otherwise we could have seen the three spires of the cathedral from this vantage point. Monte de Gozo meant Hill of Joy, it is said that pilgrims cry out in joy in this part upon seeing the end of their journey. 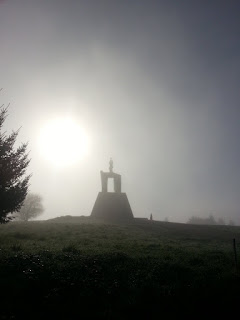 Monte De Gozo was the last hill before the cathedral. The remainder of the path was paved asphalt and descending. It led us near the airport on that foggy morning as I could hear the rumble of planes taking off and landing. Just from the frequency of plane sound I surmised that Santiago was a rather busy city.

A big sign saying Santiago De Compostela in bold red letters greeted us as we entered the central part of Santiago. We obviously posed for posterity. 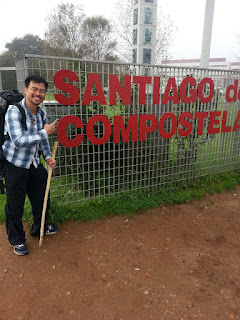 We thought we were close to about 2 kilometers from the destination.

Twice we had to ask for the direction to the cathedral because the yellow sign was not so obvious in the central area.

When at last I came to see the church spires, it seemed that my heart would burst for joy. I cannot believe that the past 13 days went like a blur and there I was, flesh and blood, with blisters and all finally seeing the cathedral of Santiago. 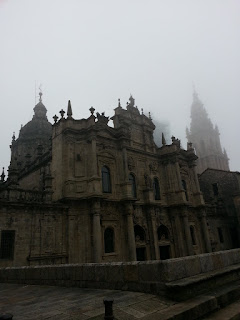 We came in just in time, almost noon. We deposited our bags so we could attend the mass. It was solemn and I offered all my petitions and the petitions I have received from friends and family. 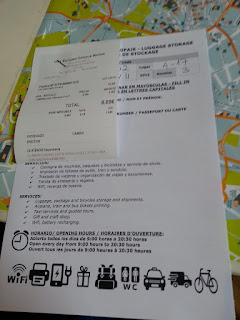 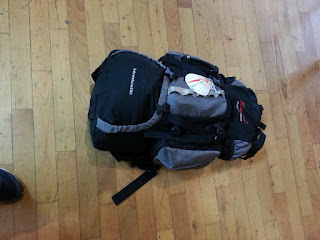 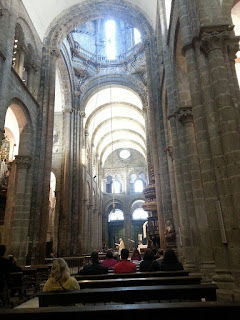 After the mass, we lingered a bit to marvel at the majesty of the church interiors. We met the other pilgrims.  Some looked very familiar, either I’ve seen them on the road or we were booked in the same hostel. They were all beaming, proud of making it through the journey. 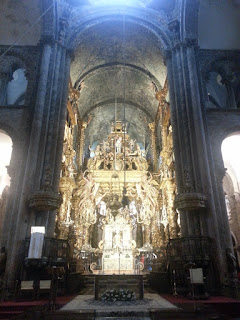 I saw Eugene the guy from Gerona who was my roommate in Trebadelo. 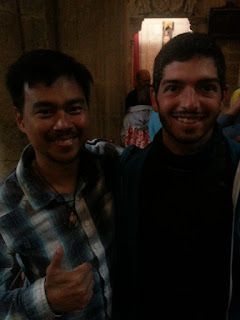 Robi met a lot of pilgrims who started their journey with him in St Jean Pied de Port. They hugged each other as if long lost friends.

After the mass we claimed our certificates. Mine indicated my Latin name and the distance I travelled -300 kilometers. We hung around a bit in front of the cathedral and had posterity shots although I was a bit disappointed that the scaffolding ruined what otherwise would have been a spectacular view of the landmark. I was happy to see again David the Mexican guy I met in the Melide albergue. 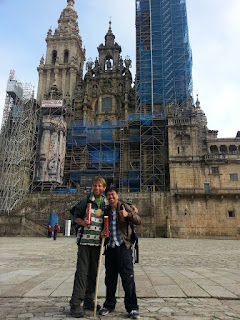 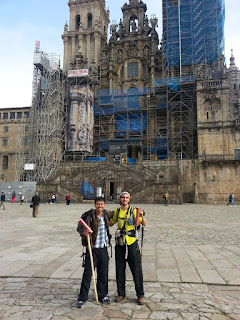 To celebrate our journey’s end, Robi and I had lunch buffet with three Koreans at Carrefour -about 2 kilometers from the center. I did not mind the distance, 2 kilometers seemed a piece of cake when you’ve just walked 300 kilometers. 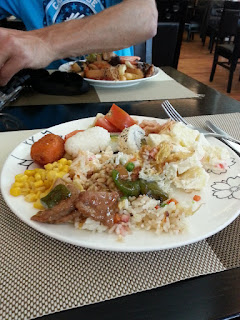 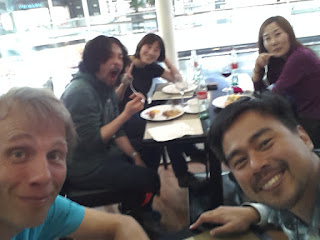 We stayed at a private albergue named La Estrella de Santiago which offered 6 euros/night. It was the cheapest we could find, a little far from the center but it had great amenities.

Florent who was our roommate in Astorga also happened to be booked in the same place. And so the three of us had a mini-reunion. Florent walked 2000 kilometers, Robi 700 and I 300. We chatted a bit over a bottle of wine bought at the neighborhood supermercado. 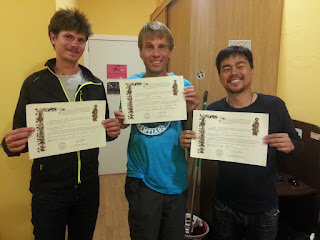 As Robi was still set to go to the coast (Finisterre) which is about another 3 days, I gave him my cane as a gift.

I have booked my trip back to Madrid via Blabla car. I was set to be picked at the Santiago De Compostela train station at 4am.

At 3 am I took one last glance of my albergue then shut the main door behind. I did not bother waking up Robi. I had given him already my Buen Camino.

300 kilometers
13 days
It had been an awesome journey, definitely something for the books.

The past 13 days went like a blur. It had been a tough walk with shin splint and blisters. My will had been tested several times and yet I made it. I recalled the past few days, a sea of faces flashed before me, the German guy who gave me medicine in Acebo, the bar tender in Foncebadon, Christian my first roommate in the walk. I thought about all the pilgrims I’ve met in this wonderful journey, each with their own stories, triumphs and trials. They are most likely back in their own lives, in their own unfolding stories. Most I won’t ever see again. They will now forever be part of my memories of my walk to Santiago.

In my heart I knew I will be back again.