Despite its limited capacity, the albergue in Triacastela managed to house several pilgrims from seemingly all walks of life: the German mother and daughter tandem whom I met in Trabadelo, the foursome group from US and UK whom I saw a day earlier at O Cerebro, an athletic Spanish guy with thinning hair who reminded me of Nicholas Cage and a lanky Singaporean who I met for the first time in this albergue.

The daughter of the German tandem I particularly remembered because she had a hard time communicating with the laundrywoman who only spoke in Spanish.  The old lady remembered during my registration that I spoke a bit of Spanish so she asked me if I could translate her thoughts to the German girl. Apparently the woman was telling the girl that their laundry couldn’t be fit in one washing (the downpour gave them a handful of wet clothing) and had to be split in two loads. I felt so proud that despite my Spanish A2 level I finally did a useful translation in real life.

I was fortunate that despite the rain, the clothes inside my bag were spared, thanks to the layer of garbage bag I used to wrap them, a trick I have learned from my mountaineering days.

I don’t recall the exact time I started my walk the following morning but I was one of the last ones to leave. A middle-aged guy was walking just a few steps ahead of me. When he saw me following him after a rather confusing fork, he turned back and told me that he was headed to the longer route. He pointed to the shortcut which was the one on my right. I thanked him. There must be something in the way I carried myself that instinctively told him I would opt for the shorter walk.  I took the short cut obviously. 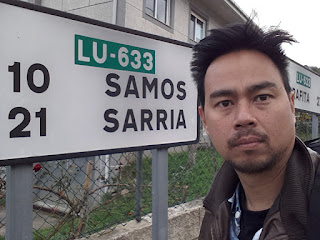 The path did not have many signs, like the ubiquitous yellow arrow or shell mark, but since it was straight and did not have any forks, I knew that I was on the right path.

I was alone for about an hour, deep in my own thoughts when I got the surprise of my life. Out of nowhere a booming voice came about, “Buen Camino”. I was so immersed in the walk that I failed to notice a biker catching up from behind.
“Buen Camino” I answered back, nonchalant on the surface hiding the fact that he just scared the living daylights out of me.

Further on, what seemed like 2 kilometers, I saw the trail heading to a row of houses- the first sign of civilization after the fork. There was a wooden bench just at the entrance of the village. It was painted green, moist from the early morning drizzle and dew, blending well with a mossy tree beside it. It also served as sort of a fence because behind it was beside a gully traitorously covered by vines. My selfie stick accidentally fell on the clearing while I was getting an apple from my backpack. I crouched beneath the bench and reached out for the stick. A few inches further and it would have been down the deep gully, irretrievable.  I managed to recover it thankfully although my right forearm brushed against a thorny plant. It left some sort of a lump that still remained on the skin to this date. 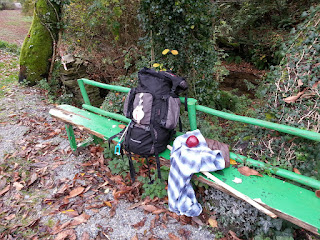 Though I took a short cut, I failed to realize that the next convenient stop was in the next 7 kilometers. It was twice the usual distance of breaks between stopovers. I felt really disappointed when in one stop over where I was hoping to refill my water bottle, the only available faucet was not working. 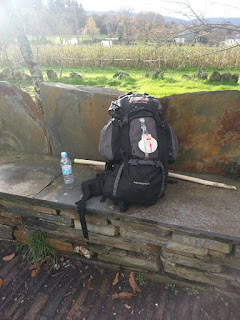 Further on, I saw the tallest pile of rocks I have seen in this journey. I picked up a piece of stone and gingerly placed on top adding to its height. It felt like leaving a bit of myself behind. I regretted the fact that I placed a rather curvy stone which would make the attempt of the next pilgrim quite challenging. I won’t be surprised if the next person would accidentally destroy the precarious structure and I somewhat regretted for not thoroughly thinking about my action. 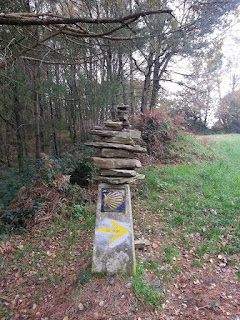 After a long walk through a muddy path and a left turn on a fork (which reminded me of a scene in Camino Portugues) I came upon a donativo stand which was a welcome sight in this part of the walk. I presumed the area used to be a shed for produce. There was ratty couch where two cute kittens were lounging. A chalkboard with writing “ Follow you heart , It is the one true compass” was leaning beside it, as if to remind the pilgrims of some truths that they might have forgotten along the way. Beside it was a small table filled with fruits, a thermos bottle, cups, biscuits and of course a small basket for the donation. I got a piece of banana and dropped a few coins. I was about to leave when Jenny, the owner came about. We chatted a bit. She gladly posed with her wares and then I said my good bye. 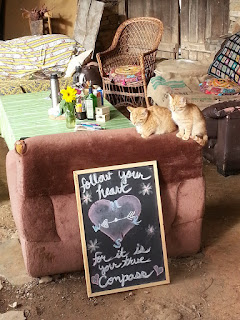 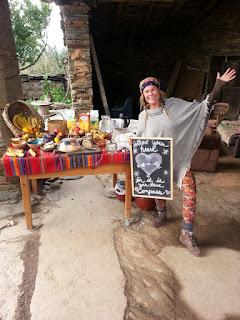 For some reason the next part of the walk reminded me of a road in Morong, Bataan,  a narrow dirt path and a private property on both sides mostly grassy fields with trees scattered randomly.

A little further I thought about the Alchemist, a book written by Paulo Coelho who got the inspiration after doing the Camino. No surprise here that the protagonist of the book was named Santiago. The universe somehow read my mind because around a bend I saw the sign of the Alchemist. 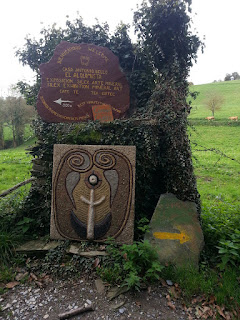 I passed by a herd of brown cows grazing on an elevated clearing. One cow was particularly close to the fence- a thin wire actually, am actually surprised how it can contain the cattle when they could easily sneak out if it wanted to. The cow stared at me and I intently stared at her and we had a staring contest that lasted for about a minute. She did not remove her gaze and for a moment I got a bit self-conscious. I saw the number tag on both her ears and somewhat pitied it. 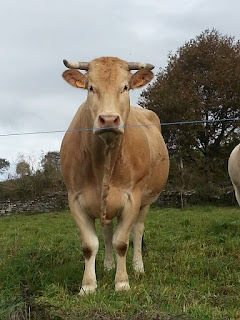 A strange thought occurred. There I was staring at the creature taking a pity on her fate. She will live her life within the confines of the fence, her days determined by her master who one day would just will just randomly pick a number which will turn out to be hers.

I was wondering what was going through her mind.  Maybe she was thinking” Poor creature, another aimless wanderer. He pities me when I in fact pity him for his meaningless existence.”  Perhaps in her own mind I was the poor creature.

The view of the farmlands gave way to a wider clearing. It signaled that I was entering once again the town center. The sight of wide plains appeared as though it welcomed me with open arms, as if it was waiting for my arrival. “What took you so long?” I played the music player on my Samsung phone and the songs shuffled. My spirit got a kick when my favorite Travesuras played. It somewhat brought things to perspective because the song had always reminded me of my one-year study in Spain. A chapter of my life that would soon be coming to a close. 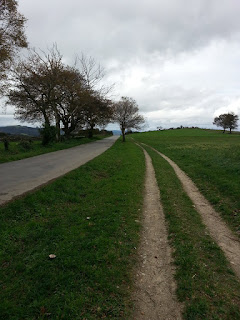 This walk was supposedly a final hurrah to end my journey in Europe. But deep in my heart if I had to be honest I would want to be part of that world.  There was a part of me that wanted the walk to be a bit longer if only to feel the magic of Europe.

I kept on playing the songs on my phone to keep me aware of the distance I have covered so far. I estimated that about fours songs on my list would more or less make me travel a kilometer.

The music gave sort of the push that I was in high spirits the next hour or so. The only downside was that I never took much photos along this path.

I could not recall now how I ate for lunch in Sarria because no photo was registered on my phone from 12:53 PM to 2:23 PM. Maybe I stopped by a Café shop and ordered for Jamon Serrano which had always been my choice whenever I got forced to stop by in a nearest available bar.

Sarria would have been a more interesting town if I had the luxury of time but I was determined to cover as much distance as possible. Roby was no longer in my mind as his distance apart was already a day’s walk worth. At this point I was resigned to the fact that I would probably just catch up with him in Santiago should he opt to stay for a day more upon arrival.

I met the Singapore guy who stayed in the Triacastela albergue. He gladly obliged when I asked him to get a shot of me with a Sarria landmark in the background. 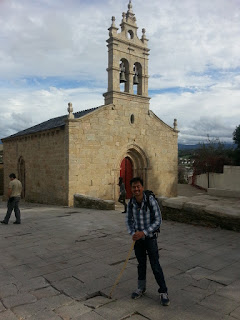 A little half past 3, I was headed out of Sarria. I saw a road sign that said that the next town would be around 8 kilometers away. I figured that in about two hours I would reach an albergue. 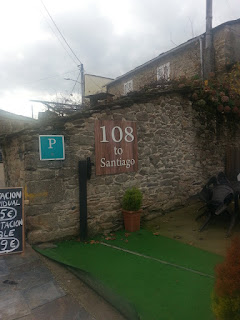 This was a wrong assumption. The distance in the road indicated the distance if one travelled by the main road. The pilgrim’s path because it was winding was much much longer. And to my horror, it was already sundown when I realized I still had 3 kilometers to cover before the next albergue.

I was scared because I was alone, my phone was draining and I was walking in a creepy wooded area. I was embarrassed to admit to myself that though I was relatively religious I was still scared of the thought of walking through the woods alone in the dark. It did not help that I kept on hearing a moaning sound (perhaps from pigs and cattle) in the background. In the growing darkness it can assume the form of a hideous monster. I prayed the rosary hastily. I offered a prayer that I get to the next albergue soon. Fortunately I got to see an American couple. I asked if they are stopping at the next albergue and if I could join them. The lady was kind enough to offer an apple. Which was timely because I was getting hungry already. My last shot was at 608 PM of a landmark indicating that Santiago was “merely” 100 km away. 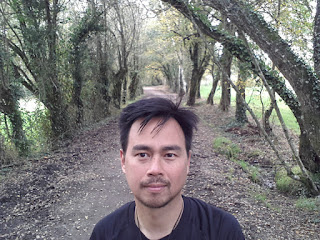 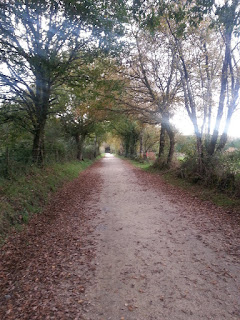 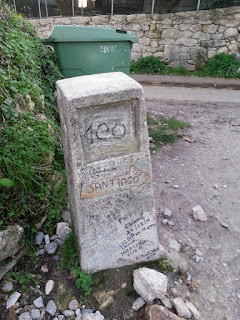 It was dark already when we reached the Calvor O Lugo albergue. I was pretty  sure I would have missed it, if I were alone because it was located 100 meters off the path.  I was thankful to have met the American couple.

The Singaporean guy who was in the Triascastela albergue was one of the occupants of the albergue. I invited him to have dinner together at the adjacent bar. Jeffrey, I finally got to know his name.

It was bit chilly outside but inside the albergue the heater gave us a good place to sleep. I slept in no time. After travelling for 9 days, only a hundred kilomters separate me from my destination.